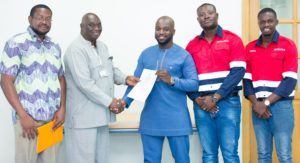 Rocketmine, a subsidiary of the listed Delta Drone Group (EPA:ALDR), received the first commercial Remotely Piloted Aircraft System (RPAS) Operating Certificate (ROC) in the Republic of Ghana; making it the first company to do so in both the northern and southern hemisphere.

With the support and guidance of the Ghana Civil Aviation Authority (GCAA), Rocketmine initiated the process of applying for a ROC in April 2017, which also involved the licensing of its local operations staff, who have now also become the first licensed commercial drone pilots in the country.

Rocketmine provides daily survey, volumetric and mapping services to some of biggest mining operations across the continent, and decided to expand its operations into Ghana in April 2017, to take advantage of the stabilising mining industry.

“We’ve been waiting for this moment, as we have officially made history as a company. We are also thrilled to share the exciting news that our pilots are Ghana’s first licensed drone operators. They received their RPLs at the beginning of September 2017,” states Kwamena Hazel, Rocketmine’s Country Manager.

Christopher Clark, Rocketmine’s Managing Director, adds, “In the best interest of safety, as well as compliance with the GCAA Part 28 regulations, we can now legally provide commercial drone data services to all enterprise customers across Ghana. We look forward to contributing towards a growing Ghanaian aviation industry, where the number of local drone registrations far exceed manned aircraft – creating an exciting opportunity for the scope and scale of drone applications in the country.”

We use cookies on our website to give you the most relevant experience by remembering your preferences and repeat visits. By clicking “Accept”, you consent to the use of ALL the cookies.
Cookie SettingsAccept
Manage consent

This website uses cookies to improve your experience while you navigate through the website. Out of these, the cookies that are categorized as necessary are stored on your browser as they are essential for the working of basic functionalities of the website. We also use third-party cookies that help us analyze and understand how you use this website. These cookies will be stored in your browser only with your consent. You also have the option to opt-out of these cookies. But opting out of some of these cookies may affect your browsing experience.
Necessary Always Enabled

Performance cookies are used to understand and analyze the key performance indexes of the website which helps in delivering a better user experience for the visitors.

Analytical cookies are used to understand how visitors interact with the website. These cookies help provide information on metrics the number of visitors, bounce rate, traffic source, etc.

Advertisement cookies are used to provide visitors with relevant ads and marketing campaigns. These cookies track visitors across websites and collect information to provide customized ads.

Other uncategorized cookies are those that are being analyzed and have not been classified into a category as yet.

FIND OUT
MORE ABOUT
UNDERGROUND SURVEY

FIND OUT
MORE ABOUT
SURVEY & MAPPING